Check out recent articles in the L.A. Weekly, The Vinyl Factory and Mixmag.

My name is Daniel Barassi. My day job is managing web / social media and multimedia / archiving for various clients. I have a multimedia production company, where I subject the 'net to all sorts of mashups and other audio / video creations. I also run a collectors database website called "The Arkivist".

In my free time, I love to hack. Whether it be sound, video, imagery or physical items, I can't resist the urge to tinker with the DNA of stuff. The Fishure-Price turntable is a perfect example of tinkering.

On September 29th, 2016, Atomic Records in Burbank gave away all of their 45s, in order to clear space...for even more 45s. While I wasn't the first person there, I still managed to fill my car up - twice - with a large number of 45s.

After getting the 45s home, I didn't want to bring them all inside (no space, dust, et cetera), so I decided to store the records in my garage, and then go and get a portable turntable. That way, I could dig outside, and I wouldn't have to lug my 1200s into the garage.

I chose a Fisher-Price battery powered portable turntable, but the cartridge situation on the turntable wasn't impressive. Mono sound, playing with a sketchy needle, with no counterweight? No bueno.

After some trial and error, I managed to fit a Shure M44-7 "DJ" cartridge into the tonearm. Wired as proper stereo, the signal goes to four switches. In one position, the switches send the stereo signal to the newly installed RCA jacks in the back. In the other position, the signal is routed - in mono - to a battery operated mini-amplifier. More specifically, the circuit board from a mini-amplifier, which I mounted to the inside of the Fishure-Price.

From there, the mini-amplifier output can travel to either the stock mono speaker, or to a newly installed mono headphone jack.

I bypassed the original power button (located under the tonearm), and moved it to a cluster of switches I installed across from the speed control. From left to right, they are "turntable power", "mini-amplifier power" (so I could turn off the 9 volt battery of the mini-amp), and the "speaker / headphones" toggle (for quiet digging while using the deck in record stores, monitoring for when I DJ without a mixer, et cetera).

Another huge feature, other than the stereo out (for both hookup to proper stereo systems, as well as for using the Fishure-Price decks with Serato Scratch Live), is the conversion of the original large volume control (next to the speed selector) into a proper pitch control (+/- 6%, according to Scratch Live). A special shout out to Gustav for giving me the idea of the pitch control.

When I first made the decks, Serato didn't have 7" control vinyl. Luckily, A-Trak released his latest (at the time) 7" single with a Serato tone on the b-side! I actually prefer the A-Trak discs, not only for the clear vinyl (so you can see the custom Fishure-Price slipmats), but also because they spin at 45rpm. The "proper" Serato 7" control discs run at 33rpm (boo!).

As these decks in their stock form are not easy to find, and the upgrades run at least $200 per turntable (and that's just parts, not including my hourly rate), these are not something I am looking to mass produce. This was just a fun project that I thought some of you would enjoy seeing. It would be cool to see if any of you do any additional hacking to your own decks. If so, I'd love to see it. Email me.

I took a Fisher-Price kids turntable, threw a Shure cartridge inside, wired it for stereo, and now it kicks ass. :)

Here are some videos of the decks in action.

Testing out the pitch control.


Putting a number of resistors in series to alter the pitch. 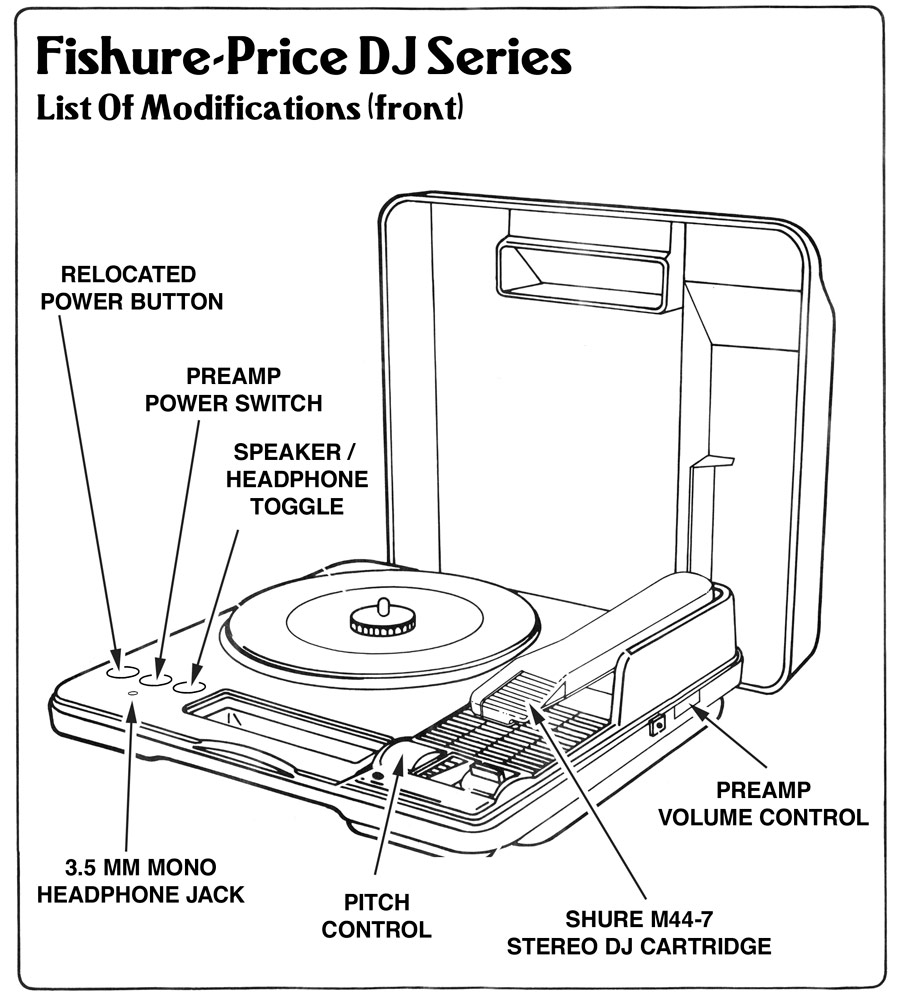 Nora, for putting up with two weeks of soldering and dremeling.
All Electronics, for being an oasis of parts.
The Radio Shack in Toluca Lake for additional parts.
Jay at Sticker Place (Burbank) for coming through with some sweet stickers for the decks.
Gustav for making me bust my ass to convert the volume pot to a pitch control.
Bob at Freakbeat Records for being an early supporter.
Steve at Atomic Records for creating the need for a portable turntable.
eBay (naturally).

This web site features a highly modified version of a Fisher-Price turntable.
The name "Fisher-Price" is a registered trademark of Mattel.
Fisher-Price has nothing to do with this project or site, other than originally making the turntable in 1983. :)

When I get to the bottom, I go back to the top of the slide...